China is not the only country in Asia that celebrates Lunar New Year. The arrival of a new cycle on the Lunar calendar marks a major holiday period in a number of Asian countries, and that means audiences will be flocking to the cinemas to catch the latest local blockbusters. Asia in Cinema offers an overview of what audiences can expect to see across Asia as it welcomes the year of the dog: 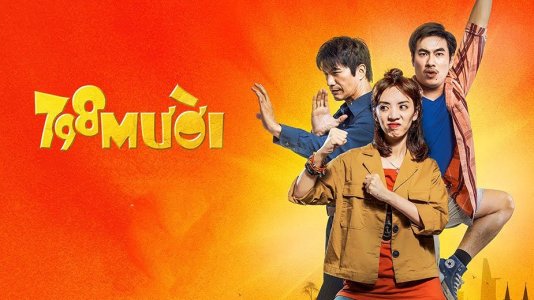 In Vietnam, the Lunar New Year holiday – or known as Tet Festival – is by far the biggest holiday of the year, lasting an entire week. It’s no surprise that there are seven local and foreign releases officially opening on February 16th, or Lunar New Years day – and they’re not even getting Black Panther day-and-date with the rest of the world.

Some releases have early previews leading up to the holiday, but Fifty Shades Freed officially kicks things off two days early on Valentine’s Day. The film franchise hasn’t done particularly well in Vietnam, but it’s hard to resist capitalizing on Valentine’s Day and the extended Tet holiday.

Meanwhile, the local industry has four comedies ready to battle the special effects extravaganzas from overseas. Dustin Nguyen (Yes, the one in Indiana Jones and 21 Jump Street) is back with his fourth directorial effort, action comedy 798 Muoi. Nguyen also stars in the film.

There are also films featuring comedians, including Truong Giang in a dual role in Siêu Sao Siêu Ngố and Hoai Linh in Đích Tôn Độc Đắc. With a number of films of the same genre going up against one another, expect competition to be fierce.

When Singaporean cinema needs a hit, it turns to Jack Neo. Before making the fifth installment of his Ah Boys to Men series (新兵正傳), Neo brings a beloved television variety show character to the big screen with Wonderful! Liang Xi Mei (旺得福梁细妹). Starring Neo in drag as the titular character, the film was quickly put together, starting production in November right after the opening of Ah Boys to Men IV (新兵正傳IV).

Friday and Saturday are designated as public holidays in Singapore, though companies have the option of giving employees Monday off if they don’t usually designate Saturday as a working day.

Like its neighbor, Malaysia will have Friday to Monday off for the Lunar New Year public holiday.

Not quite aimed at the Chinese-speaking audiences is Malay-language superhero fantasy Badang, the acting debut of young entrepreneur Aliff Syukri Kamarzaman. Seriously, you can look him up.

In South Korea, the Lunar New Year holiday – or Seollal – starts on Thursday the 15th and ends on Sunday the 18th. Last year, Confidential Assignment (공조) and The King (더 킹) managed to fend off Resident Evil: The Final Chapter. However, the tables may turn this year with Marvel’s Black Panther. The superhero film features an action sequence shot in Busan, and it already has the biggest opening day for a Marvel film in Korea since Captain America: Civil War. With the four-day weekend, the film even has a chance of becoming the second highest grossing Marvel film there behind Avengers: Age of Ultron. That film also had an action sequence shot in the country and is currently the franchise’s highest-grossing film there.

Black Panther will do battle with new releases from most of South Korea’s biggest film companies. CJ Entertainment has Golden Slumber (골든 슬럼버), the Korean adaptation of the novel by Japan’s Kotaro Isaka. The film stars Gang Dong-won as a courier accused of assassinating a presidential candidate. The novel was previously adapted in Japan by director Yoshihiro Nakamura.

Meanwhile, Lotte has Heung-Boo: The Revolutionist (흥부), a period drama about an author who turns the story of a nobleman and his power-hungry brother into a novel. The film opened on Wednesday at fourth place with a weak 47,500 admissions, and it’s expected to fall behind more family-friendly titles over the weekend.

Showbox already got a head start last week with Detective K: Secret of the Living Dead (조선명탐정: 흡혈괴마의 비밀), the third film in the popular period mystery franchise. The film topped the box office last weekend, but it may lack the staying power to reach the box office success of its two predecessors, despite the addition of Lee Min-ki this time around.

Next Entertainment World had likely hoped that Psychokinesis (염력), the fantasy comedy from Train to Busan director Yeon Sang-ho, would hold on until the holiday period, but its fate was sealed when it plummeted by 94% in its second weekend. The film has all but disappeared from local cinemas, and it still hasn’t crossed the million viewer mark. Fortunately, NEW has the worldwide Netflix deal to soften the blow.

Without Taiwan new year staple Zhu Ge-liang, there are only two local titles going up against the Hollywood invasion this year. Filling the comedy spot is Back to the Good Times (花甲大人轉男孩), the film continuation of popular limited series A Boy Named Flora A (花甲男孩轉大人). Distributed by local exhibitor Vieshow, the film received a wide 89-cinema release across the country, but it opened with a disappointing NT$3.97 million (US$136,000) in Taipei last weekend. It’s unlikely to surpass the underwhelming grosses of last year’s The Village of No Return (健忘村) and 52 Hz I Love You (52赫茲 我愛你).

Serving as counter-programming is gangster drama Gatao 2 (角頭2：王者再起). A sequel only in name to the 2015 sleeper hit, the Shine Time release stars Colin Chou, Wang Shih-Sian and Cheng Jen-shuo.

It’s also worth noting that both major local releases are unabashedly local productions with no Chinese funding whatsoever. However, both films will likely struggle opposite Black Panther – which already made NT$8.81 million (US$303,000) in Taipei alone on opening day – The Shape of Water, The Monkey King 3 (considered a Hong Kong film in Taiwan) and Ferdinand. Arthouse cinemas will also get France’s BPM and previews of The Post and Loveless.

Bouncing back from a weak showing by Journey to the West: The Demons Strike Back (西遊伏妖篇) and The Yuppie Fantasia 3 (小男人週記3之吾家有喜) last year, Hong Kong gets a total of four Chinese-language releases for the four-day public holiday. All four films are co-productions, but locals will likely go for Agent Mr. Chan, starring stand-up comedian Dayo Wong in his first film lead role since 2007’s House of Mahjong (嚦咕嚦咕對對碰) (The Treasure 神秘寶藏was originally set for release in 2015 but has yet to see the light of day).

The “traditional” Lunar New Year comedy this year is Patrick Kong’s A Beautiful Moment, a Hong Kong-style take on Nancy Meyers’ It’s Complicated with an all-star cast that claims to have 80 local stars. There’s also Monkey King 3 and Monster Hunt 2, the latter given extra support by the Broadway Cinema chain, owned by co-financier Edko Films.

The four Chinese releases will go up against Black Panther and animated comedies Ferdinand and Ozzy. The arthouse circuit will have Oscar nominee A Fantastic Woman, and there are also previews of South Korea’s1987: When the Day Comes and Oscar nominee Molly’s Game.

Lasting a week, the Lunar New Year slot has become the most competitive period of the year at the Chinese box office. In addition to Monkey King, Monster Hunt 2 and Operation Red Sea, China will also see the opening of Detective Chinatown 2 (唐人街探案2), animated comedy Boonie Bears: The Big Shrink (熊出沒·變形記) and The Face of My Gene (祖宗十九代), the directorial debut of comedian Guo Degang.

Early box office indicates that Monster Hunt 2 and Detective Chinatown 2 will have no trouble at all crossing that mighty 1 billion yuan mark. However, the question is if the other releases will also reach that mark. The Monkey King 2 did so in 2016, the prospects is looking iffy at this early stage. Operation Red Sea may follow in the footsteps of Operation Mekong (湄公河行動) with an extended theatrical run, depending on word-of-mouth. Of course, it doesn’t hurt that Red Sea is partly funded by the Chinese navy.

Unlike other regions in Asia, China has an unofficial protectionist policy for local films during major holiday periods. There will be no foreign films opening in the country until The Leisure Seeker opens on February 23rd, followed by Three Billboards Outside Ebbing, Missouri, Bollywood drama Bajrangi Bhaijaan, Peter Rabbit and All the Money in the World opening on March 2nd.